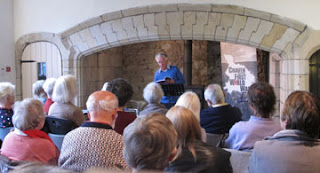 Once again Settle Sessions provided a wonderfully varied programme of prose and poetry.

Local writer Jean Harrison, well known as a poet, read extracts from her debut novel 'On a Wandering Planet,' a highly imaginative book which gripped her listeners from the start.
Jean's prose impresses as much as her poetry and the themes of loss, search and redemption are woven into an exciting story that challenges the way society chooses to live. Her characters are rich, complex and alive on the page.

Neil Curry, an established poet and literary critic, read from the poems in his new book 'Some Letters Never Sent' as well as from his earlier work. His poems have a great depth rooted in scholarship and knowledge but are accessible through a careful choice of words, a compassionate tone and perfectly judged humour, and he drew the audience in by entertainingly giving us the background to his work.